To give us our full and official name, we are the Allgäuer Sennereien & Käsegroßhandlung Albert Herz GmbH, and have been based at our modern head office in Kimratshofen, a suburb of Altusried in Bavaria/Germany, since 2003. Everything under one roof: administration, quality assurance, development and marketing to state-of-the-art production systems for cheese ripening and packaging. Since 2010, a new production building has complemented our head office, where we now also have a number of state-of-the-art packaging lines in operation.
How we see ourselves: everything is always different at Herz. We are always open to trends such as cheese with unsaturated omega-3 fatty acids, and innovative packaging solutions. We closely observe customer wishes so we can always extend and optimise our product range. The best cheese for good customers. That’s our motto.

Tradition and future are inextricably linked together at Herz-Käse. Ever since the company was founded by Ottmar Herz in 1839, the cheese and service provided by our company have been known by the name of Herz. We live our values: tradition, a love of our home, and pragmatism. And we live the future. We deliberately talk about being a company, and not an operation. Doing something proactively rather than just running it – that is our understanding of existing on a market through consistency.
In retrospect, much revolves around annual figures, and snapshots become the whole picture. Although individual events may seem insignificant, considered together they are an important testimony to the company’s history.

More about the history of Herz-Käse 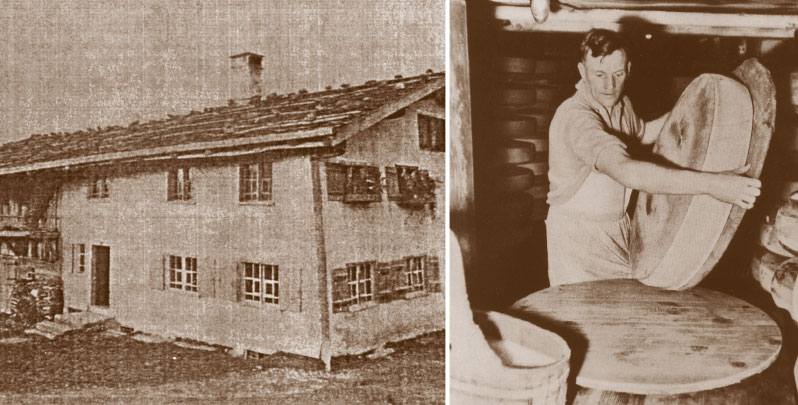 In the 19th century, there were already several cheese companies in the Allgäu that sold their products beyond the region’s borders. One of these wholesale companies was Ottmar Herz in Sonthofen. In 1835, Ottmar Herz (1812–1893) founded a cheese dairy and wholesale business on his parents’ farm in Rauhenzell.

Success in Sonthofen
In 1839, Ottmar Herz moved his company to nearby Sonthofen. According to a travelogue of 1868, the cheese dairy was already supplying cheese to the German Customs Union and to France.

In 1878, Ottmar Herz and his three sons Albert (1840–1892), Xaver (1849–1920) and Ottmar III (1861–1936) founded a general partnership, laying the foundations for a modern company. Ottmar Herz OHG flourished over the following decades, which was also reflected in the constantly increasing number of leased dairies that supplied the cheese wholesaler. Mainly Emmentaler cheese was made and marketed at that time. It was only in the long winter months, when some of the alpine dairies were only able to supply small amounts of milk, that soft cheese, mainly Limburger, was produced.
Leaders in the Allgäu
In 1883, a new warehouse and office building was built at Völkstraße 2 in Sonthofen. The company continued to focus its production on Emmentaler in leased and contract dairies. It expanded dramatically between 1890 and 1910, when up to 30 leased dairies supplied their products. Ottmar Herz could quite rightly refer to itself as one of the leading cheese wholesalers in the Allgäu. Xaver Herz, who ran the company’s business until his retirement in 1919, played a key role in securing this upturn. In 1909, the forward-thinking entrepreneur was awarded the title of “Kommerzienrat” – Councillor of Commerce – for his achievements. Herz-Käse and the war years
The company also suffered its share of problems in WW1 (1914–1918). But ultimately, it survived relatively unscathed, and business resumed at the end of the war. In 1919, Xaver Herz retired from the company at the age of 70 years. The company continued as the Allgäuer Molkereiindustrie and public limited company, Ottmar Herz AG. A genuine family company
However, the family remained on the management board, which played an important role in achieving continuity: Albert Herz (1882–1954), son of Kommerzienrat Xaver Herz, was given general commercial power of representation, and his uncle, Ottmar Herz III, helped shape the company’s destiny as Chairman of the Supervisory Board. Difficult times for Herz-Käse
As elsewhere, over the following years inflation resulted in tremendous economic difficulties, leading in 1925 to the liquidation of the public limited company. This resulted in two companies, one of which was Ottmar Herz GmbH based in Sonthofen, whose products included soft cheese. And with tremendous success, because the two well-known varieties “Bergmännle” and “Herzjunge” met the tastes of cheese-lovers and, thanks to their excellent quality, led the market for many years. In 1953, the company was acquired by Kraft-Käse-Werke GmbH Lindenberg. Founding of Albert Herz AG
The Albert Herz company was the second company to emerge from the public limited company Ottmar Herz. Albert Herz took over the Emmentaler division in 1925. Like the wholesale business of his father Xaver Herz before him, he was supplied mainly by leased dairies. Business flourished over the following years, but in 1945, just before the end of WW2, the Albert Herz company suffered a terrible blow. The company’s premises were badly hit in an Allied bombing raid on Sonthofen on 22 February, tragically with some loss of life. The successful Bihler years
Josef Bihler retired in 1989. In the same year, the company was acquired by the Molkereizentrale Bayern, who continued to run it under the name Albert Herz GmbH. This was the end of the 150-year history of a family company. To this day, the Villa Herz – the “Herz castle” built on the Grüntenstraße in 1890 – is a reminder of the Herz cheese dynasty in Sonthofen. In 2003, the company gave up its business premises in Sonthofen and moved to its current location in Kimratshofen. Herz-Käse in Kimratshofen
1989 geht Josef Bihler in den Ruhestand. In diesem Jahr übernimmt die Molkereizentrale Bayern die Firma, die sie unter dem Namen Albert Herz GmbH weiterführt. Damit endet die über 150 Jahre andauernde Geschichte eines Familienunternehmens. Noch heute zeugt die Villa Herz – das 1890 erbaute „Herz-Schlössle“ in der Grüntenstraße – von der Bedeutung der Käsedynastie Herz in Sonthofen. 2003 werden die Geschäftsgebäude in Sonthofen aufgegeben, die Firma siedelt um an den heutigen Standort Kimratshofen.

The desire for regionality is a sign of our times. Globalisation is resulting in an increasing desire in people for regional references. And globalisation isn’t going to stop, not at any country or any product. A natural product in particular lives by its identity, its roots. Our Allgäu is known for its agricultural tradition. For centuries, its croplands have been a safe and reliable source of food, especially of milk and cheese. This natural product is part of our self-image and of the self-image of an entire region. The Allgäu tends its original landscape, the gentle undulations of its rich greenery, with vision, where the purest Alpine air and crystal clear mountain water feed our milk.